Amazon is taking a bit of flak at the moment over the way its Android Appstore operates. The catalyst for this was a blog posting by Australian app developer Shifty Jelly revealing that, contrary to popular belief (belief informed by Amazon’s own Developer Agreement), Amazon does not make payments to the developers of apps it lists as Free App of the Day. The Developer Agreement requires that Amazon reimburses the developer with 20% of the list price for each app it gives away as a free download. However, in order to be listed as Free App of the Day, Amazon apparently requires the developer to agree to waive this part of the contract and to accept 0% instead.

To be clear, Amazon is not forcing the developer to give the app away for nothing, they can decline the offer, but this behaviour does have the faint whiff of a bait and switch and undermines one of the key reasons I highlighted previously for listing your apps with Amazon. Perhaps this is just another example of the old adage that if something sounds too good to be true, it probably is.

Shifty Jelly’s blog post lists additional complaints that echo other disgruntled developers. The approval time is only a minor annoyance for me. Some degree of delay is inevitable on a curated app store and Amazon’s approval time is comparable to Apple’s. Surrendering control of pricing has been controversial but it is clearly outlined when you sign-up. I was willing to go along with this because I assumed that Amazon’s goals would align with mine (we would both benefit from maximising the revenue from my apps).

More annoying is that Amazon will rewrite your app’s description. In most cases for me this has only involved tweaking a few words but in one instance the description was rewritten from scratch and I found the result pretty infantile. The issue extends beyond the description; the developer has no control over the formatting and content of the product page. It’s clear that some publishers are more equal than others because some apps get a rich treatment while most receive only the most basic listing. I enquired about how to get my page upgraded and didn’t really get an answer except to be told that Amazon doesn’t have the resources to provide the full treatment for all apps. On the plus side, at least when I contact Amazon I eventually get a response. There is no indication that there are any human beings involved in the operation of Google’s Android Market.

All of these complaints would be overlooked if the Amazon Appstore delivered impressive revenue for developers but at the moment it doesn’t. Part of this is due to only serving the US. We can reasonably expect that it will eventually expand to other countries where Amazon has a presence, though when this might happen is anyone’s guess. We can also expect to see a big push when Amazon unveils its own Android tablets. For now though Amazon’s offering to developers is underwhelming.

Update (3rd August 2011): Shifty Jelly is having problems getting Amazon to remove the app: 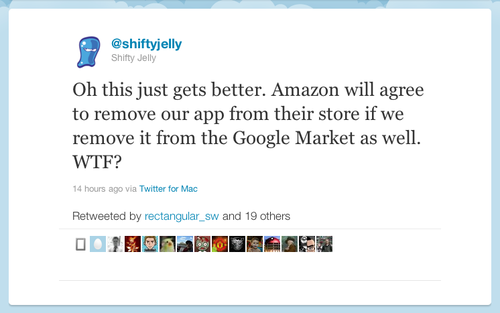 I hope this is just a misunderstanding. It’s terrible PR for Amazon.